What Are Spyware, Malware and Computer Virus? 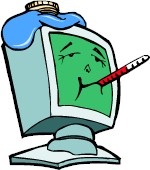 with the computer, without the person’s consent or knowledge. Spyware programs can collect various types of personal information, such as Internet surfing habit and sites that have been visited. It also interferes with user control of the computer in other ways, by installing additional software, redirecting Web browser activity, or accessing websites blindly that will cause more harmful viruses. Spyware can even change computer settings, resulting in slow connection speeds, different home pages, and loss of Internet or other programs.

Malware also known as Malicious Software, is software designed to infiltrate or damage a computer system without the owner’s consent. Software is considered malware based on the perceived intent of the creator rather than any particular features. Malware includes computer viruses, worms, Trojan horses, most spyware, dishonest adware, and other malicious and unwanted software.

Phishing is the criminally fraudulent process of attempting to acquire sensitive information such as usernames, passwords and credit card details, by masquerading as a trustworthy entity in an electronic communication. Communications claiming to be from PayPal, eBay, YouTube or online banks are commonly used to lure the unsuspecting user. Phishing is typically carried out by e-mail or instant messaging and it often directs users to enter details at a website. Phishing is an example of social engineering techniques used to fool users.

If you are not sure if an email or electronic message received is from a trustworthy source, we recommend you notify the someone via the phone or go directly to the company’s website using a link other than the one sent in the electronic communication before providing any sensitive information.

Computer Virus is a computer program that can copy itself and infect a computer without permission or knowledge of the user. The term “virus” is also commonly used to refer to many different types of malware and adware programs. The original virus may modify the copies, or the copies may modify themselves. A virus can only spread from one computer to another when its host is taken to the uninfected computer, for instance by a user sending it over a network or the Internet (via email), or by carrying it on a removable medium such as a floppy disk, CD, or USB drive.

The only way a person can remove viruses and other malware and spyware from a computer is by using spyware programs, antivirus software and registry processors to clean the computer.

Antivirus Software is computer programs that attempt to identify, neutralize or eliminate malicious software. Most modern antivirus software is designed to combat a wide range of threats, including worms, phishing attacks, and other malware. Antivirus software typically uses two different approaches to accomplish this:

The second approach is called heuristic analysis. Such analysis may include data captures, port monitoring and other methods. Most commercial antivirus software uses both of these approaches, with an emphasis on the virus dictionary approach.

It is very important that you install some type of antivirus software on your computer. We recommend you update the program’s virus definition (dictionary) daily and run a full scan on the computer weekly.